Blinded by Privilege: Corporate Media in Attendance, but Bewildered by the Nevada Caucus Outcome 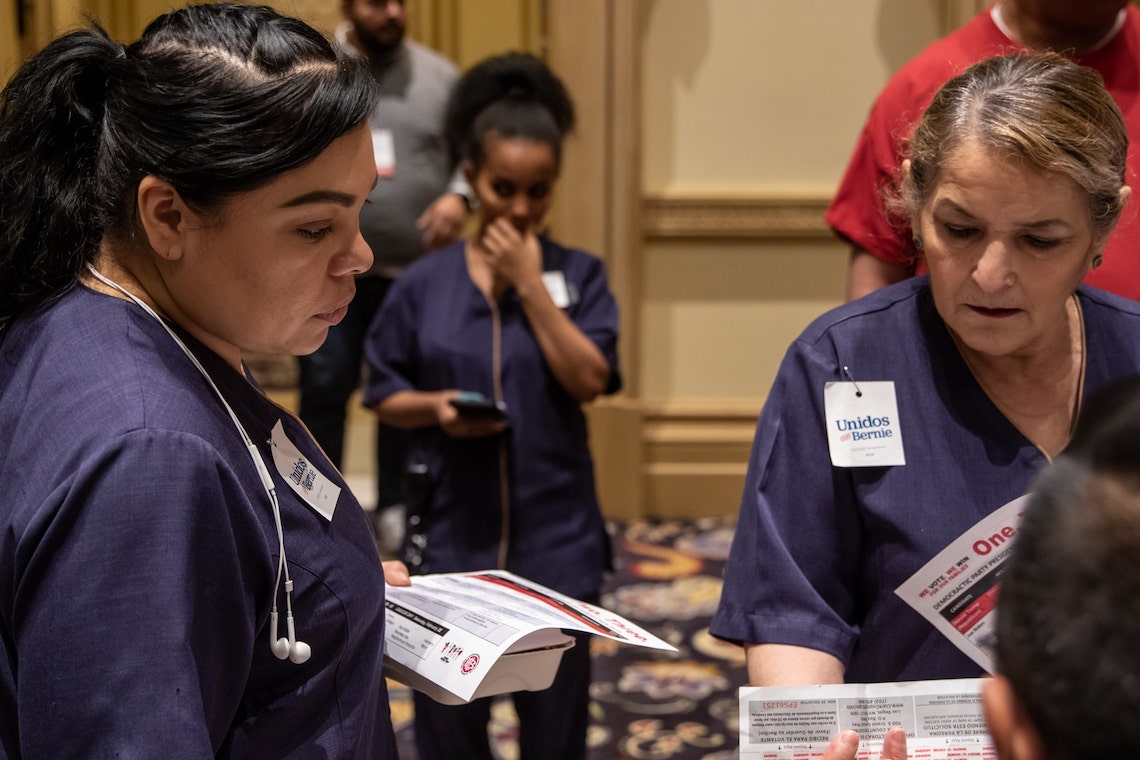 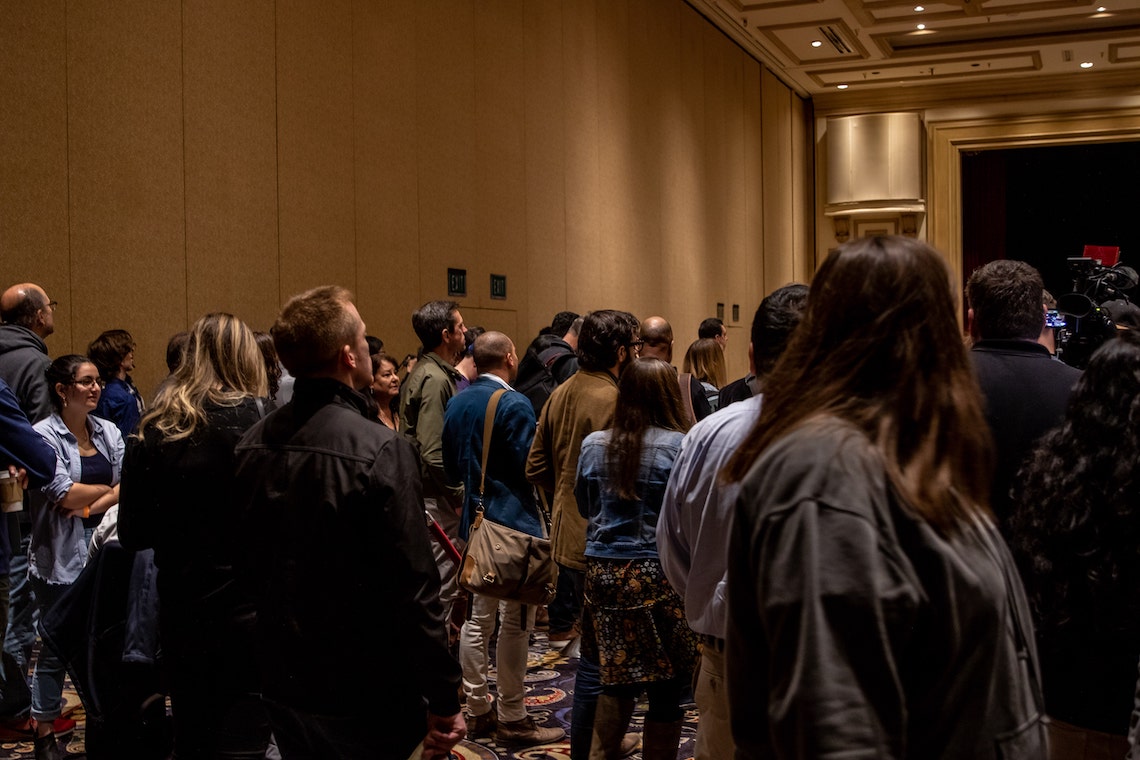 The press area at the Bellagio Hotel in Las Vegas, Nevada, February 22, 2020. Courtesy of Vanessa Martinez

“I hate the Young Turks” exclaimed the twenty-something year old woman standing less than a foot to my right. Her disdain for populist media and figures was apropos of the elitism I found myself engulfed in at the Bellagio Hotel’s Ballroom in Las Vegas. It was the morning of the 2020 Nevada caucus, and I was there to cover election matters. Democratic Party officials cordoned off a small area at the back of ballroom with stanchions for the press. It made it easier for party officials to inundate all of us at once with their talking points. One party spokesperson explained that “this is not Iowa” and “we can guarantee security.” However, seconds later the proclamation was exposed as empty rhetoric when a reporter asked who was securing the Nevada caucus and how they were doing so? The spokesperson replied, “I do not know and even if I did I am not sure I would tell you.” I quickly asked, “you do not know or you won’t tell us?” To which she replied, “I do not know.”

Once I finally escaped the spin room for a short walk in the main hallway, a reporter from a major national outlet asked why I was so critical of the caucus being held in a casino. As background, the Bellagio was chosen as a strip-caucus site, introduced as a convenient location for hotel and casino employees to vote within a 2.5-mile radius of where they work. However, when I arrived I discovered that there were no signs or arrows listing where the caucus was located inside the very large casino/hotel. In fact, once we arrived at the Bellagio we asked three different employees about the caucus location and received three different answers – one of which was correct. It could be reasonably assumed that the lack of information acted as a barrier for interested voters to overcome.

The reporter seemed to think that the strip-caucus concept was convenient; especially considering that the casinos were reportedly giving the workers an hour to vote. They asked if I agreed. I politely explained that there was nothing laudable about oligarchs deciding who gets to vote and how long they have to do so. The smirk on the reporter’s face, and quick change of topics, implied that they either agreed or realized how elitist the premise of the question had been.

There was undoubtedly a racial component to the elitism of the press at the Bellagio caucus site. The homogenous group of roughly 75 people looked like a vat of sour cream. There were exceptions for sure, two of whom were my students. They confided they felt that reporters’ racism resulted in fearful and confused glares sent their way. I personally witnessed my students being pushed aside and ignored by other members of the press. In fact, the general lack of common courtesy and conversation among the press was jarring given that it is an industry where people supposedly come first. At the Bellagio, it seemed as if journalists’ socialization process began and ended at a monastery. 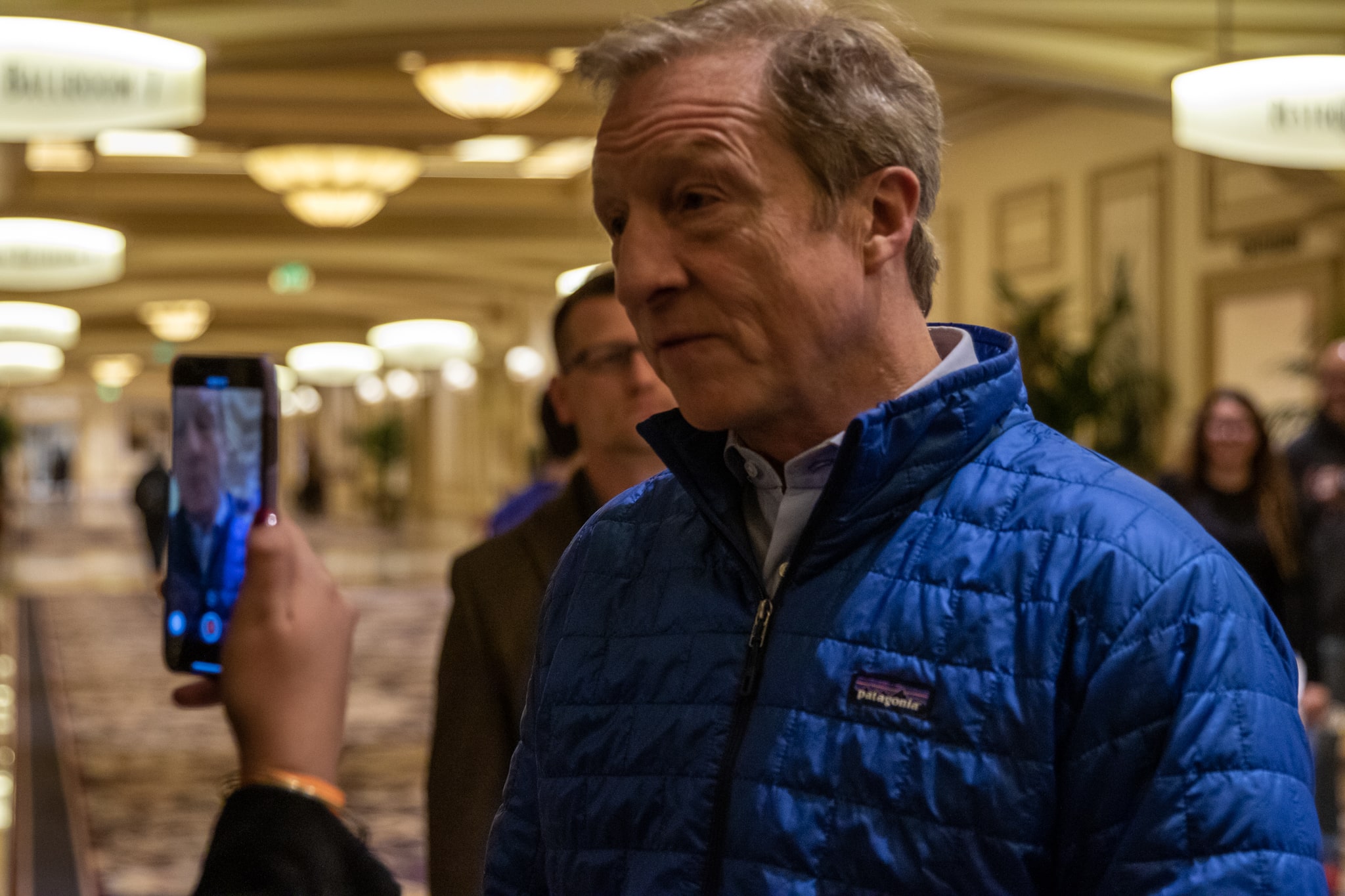 Elitism of the press was even more pronounced in their approach to whom or what they found newsworthy. At one point, I was interviewing working class people from various campaigns in the hallway outside of the ballroom for our podcast Along The Line. Suddenly, presidential candidate Tom Steyer appeared. Like flies on manure, the press came out of the ballroom, where the election was scheduled to be held, and began competing to ask him a question. Steyer stood in the hallway until everyone was able to ask him a question. I declined. (Note: since Nevada, Steyer has dropped out of the race). 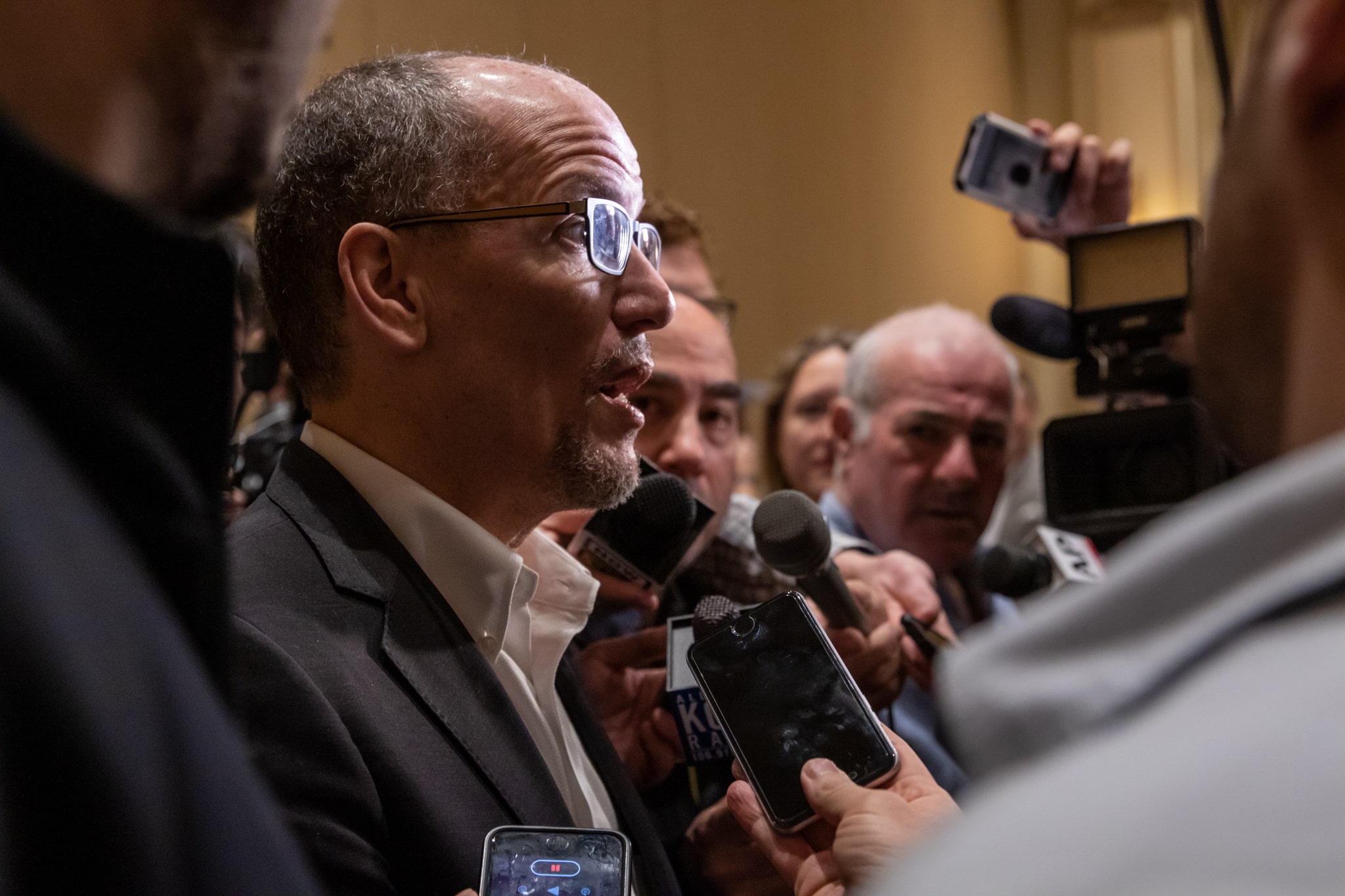 Chair of the Democratic National Committee Tom Perez being interviewed at the Bellagio Hotel in Las Vegas February 22, 2020. Courtesy of Vanessa Martinez

At about the same time, the Chair of the Democratic National Committee, Tom Perez, entered the hallway, answering questions, but he refused to stop walking which forced the camera operators to walk backward toward the backs of other camera people recording Steyer. The slight collision, due to a lack of awareness of their surroundings, was a perfect analogy for press elitism in electoral politics.

Hotel laborers participating in the Nevada Caucus at the Bellagio Hotel in Las Vegas February 22, 2020. Courtesy of Vanessa Martinez

In fact, at that same time the press’ sycophantic obsession with the elite political class had caused a near collision of camera people, a group of roughly 20 women of color, dressed in their work uniforms, some wearing Sanders’ stickers, walked into the caucus room in a coordinated and orderly fashion. No one from the press seemed interested in filming their entrance, let alone asking them questions.

Given my research with Mickey Huff in our book, United States of Distraction, I found the whole episode less than shocking. It explains why so many elites in the corporate news media continuously tout false definitions of electability and disproven claims about Sanders’ voters’ ceiling/inability to expand the electorate despite his measurable support among the youth, women, and people of color. Whether it be with colleagues in the media or the political class whom they follow like fan-boys, the corporate press have limited interest in non-elites by design.

Indeed, after the Nevada caucus, corporate media personalities displayed in myriad ways their bewilderment about how their elitist brand of politics was not shared by much of the electorate and their mounting disdain for the Sanders’ campaign. These included the corporate media’s legitimate shock expressed about Sanders’ success with Latinx voters; MSNBC’s Nicole Wallace’s declaration that she had “no idea what voters think about anything anymore;” Chris Mathews’ hyperbolically sorrowful comparison of Sanders’ victory over the neoliberal order to the fall of France to Nazi Germany; MSNBC contributor and political strategist for Bill and Hillary Clinton James Carville, who ignored the past four years of coverage, claiming Sanders had not been vetted and that Russian President Vladimir Putin had tilted the caucus outcome (he was referencing a propaganda story that had originated from the intelligence community and was published by The Washington Post before being retracted just after the caucus); CNN’s Bakari Sellers, arguing that Sanders, who had just historically won the popular vote in the first three primary states, was not front runner in the election; and finally, not to be outdone, was CNN’s Michael Smerconish, who actually compared Bernie Sanders to the Coronavirus.

After Nevada, my advice to members of the press is simple– if you want to know more about the electorate and the policies they care about, talk to the voters. Trust me, you got this!

Dr. Nolan Higdon is an author and university lecturer of history and media studies. Higdon’s areas of concentration include youth culture, news media history, and critical media literacy. He sits on the boards of the Action Coalition for Media Education and Northwest Alliance For Alternative Media And Education. His most recent publications include The Anatomy of Fake News from University of California Press (forthcoming 2020) and United States of Distraction with Mickey Huff from City Lights Publishers (2019). He is co-host of the Along the Line podcast with “Dr. Dreadlocks” Nicholas Baham III, and a longtime contributor to Project Censored’s annual book, Censored. In addition, he has been a contributor to Truthout and Counter-punch; and a guest commentator for The New York Times, San Francisco Chronicle, and numerous television news outlets.