Cuba Sets a Global Example for the Achievements of Socialism

In an all day conference, February 10, 2012, some 120 authors, professors, and journalists, from dozens of Caribbean, American and African countries, met with Fidel Castro. Those attending were invited participants for the “Intellectual Encounters for Peace and the Preservation of the Environment” event at the Havana Convention Center. Topics discussed in the nine-hour session were world peace, environmentalism, neo-liberal capitalism, and the continuing importance of socialism.

Fidel Castro (age 85) urged those assembled to a moral duty to prevent the extinction of humankind and challenge the expanding predations of neo-liberal global capitalism. He expressed concern for the inevitable collapse of Wall Street and the international monetary system. Paper money is worthless without backing from gold or other assets, Castro asserted. Environmental destruction is classless in that eventually all will suffer—both the rich and the poor—if neo-liberal capitalism continues on its rampart global destruction, he professed.

Castro’s main message was clear. Cuban socialism is an international example of a humanitarian economy in the world. “We have over 80,000 doctors,” he said, and “we are currently training 830 Pakistani medical students and many others from around the world.”

Fidel Castro, reverently referred to as “Commandante” by many of those present, was flanked by the Cuban Minister of Culture, Abel Prieto, and the president of the Cuban Book Institute, Zuleika Romay. The participants in the encounter were invited guests to the 2012 International Cuban Book Fair that ran from February 10 to 19 in Havana.

The nine-hour session went from 1:00 PM until after 10:00 PM, with only two short coffee breaks. Fidel gave extended responses during the event, commenting on the presentations, asking questions, and recalling the history of the Cuban revolution and Cuba’s humanitarian efforts over the past fifty plus years. Some 40 people presented briefings on their concerns. The lies and propaganda of the corporate/capitalist media were important themes for the day. One participant remarked how the global corporate media seeks to create a monoculture of the mind inside the capitalist countries.

As an invited author for the International Cuban Book Fair, I was honored to participate in the discussions held with the “Commandante.” His energy is inspiring and his command of history and contemporary issues is phenomenal. Castro had serious health issues a few years back, but remains mentally alert. He walked with assistance from his bodyguards, but remained fully participatory in the nine-hour session.

Cuba is an international example of the potentialities of socialism, and an ongoing symbolic challenge to marketplace capitalism. In the United States there is a continuing propaganda drumbeat against the Cuban revolution. Castro is often described as a military dictator repressing his people and blocking freedoms in Cuba. But this description ignores some undisputed social advances under his leadership that could serve as an example of what a society can do when it turns its resources to humanitarian purposes.

Contemporary neo-liberal capitalism undercuts wages, unions and social welfare, which results in the expansion of poverty, hunger, and extreme inequality. Cuba is a demonstration that humanitarian socialism can work for the masses. Cuba is the number one organic farming country in the world. Cuba has full employment, zero starvation, and some of the best health care in the world. Cuba’s life expectancy is equal to the United States and education up through university is paid for by the state for all students.

As a media-reform advocate, participant and observer, I watched tens of thousands of young people arrive at the International Book Fair in the old Spanish fort overlooking downtown Havana. These are multi-generations of people who have never suffered media advertisements. Three University of Havana literature majors, with whom I spent a full day, laughed hysterically when I asked them if they wanted a McDonald’s Happy Meal. They represent a people who accept the equality of socialism and collective growth of human betterment, and will strongly defend their way of life if necessary. As literature majors they have completed three years of Latin, and are starting classical Greek. They have had courses in historical and modern Latin American and European literature, and art. Their university education costs them nothing, and the government provides all textbooks and living expenses.

After the collapse of the USSR, Cuba lost most of it subsidies form the socialist block of nations. The early 1990s were a difficult transition. This was when Cuba opened it doors to those who wanted to leave. Some 30,000 people choose to move to the United States. Yet, ten million people choose to stay and build the independent socialist country that Cuba is today. Several other South American countries, notably Venezuela and Ecuador, have taken note of Cuba’s successes and are moving in a similar direction seeking socialist equality.

Some in the US believe that when the senior Cuban leadership from the 1959 revolution passes away, US corporations and displaced Cubans abroad will waltz back into Havana to return capitalism to the island. It is very clear to me, and many contemporary observers, that multiple generations of socialist Cubans will never allow this to happen. 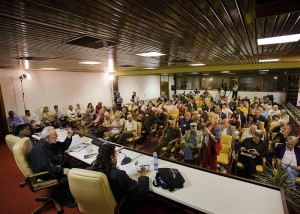