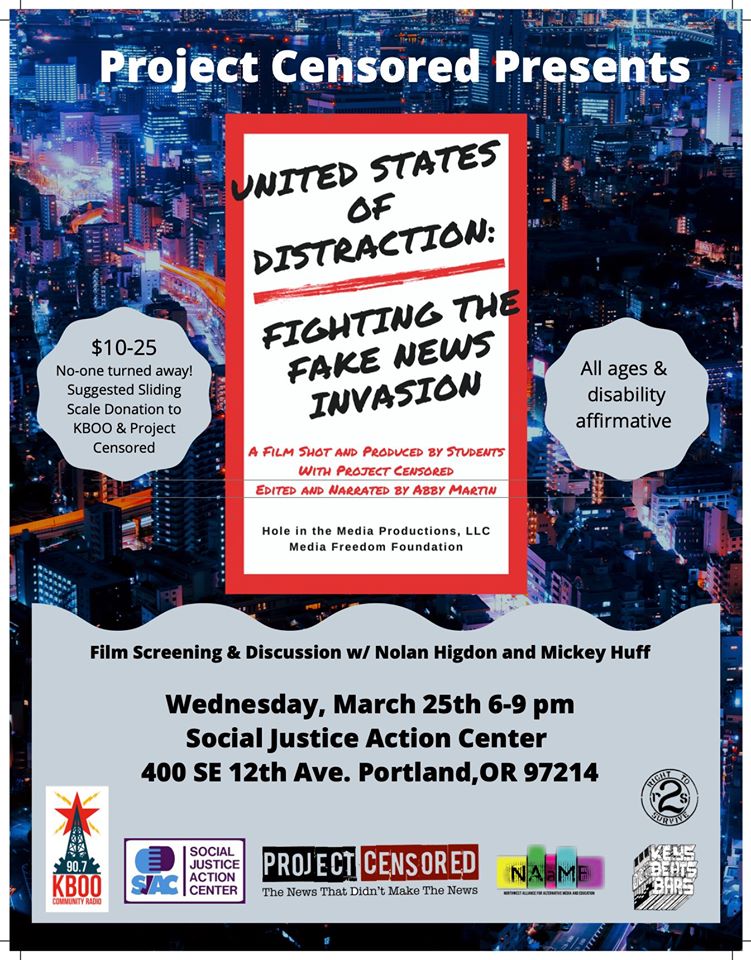 $10-25 suggested sliding scale donation to Project Censored & KBOO Community Radio & nobody turned away for lack of funds!Event is all ages & disability affirmative!

Join us for an amazing movie screening followed by Q&A with film contributors Nolan Higdon and Mickey Huff, also co-authors of United States of Distraction: Media Manipulation in Post-Truth America (and what we can do about it) (San Francisco: City Light Publishers, 2019): http://www.citylights.com/book/?GCOI=87286100388060

Edited and narrated by Abby Martin of The Empire Files.
Content directed by Nolan Higdon, Mickey Huff, Andy Lee Roth and Abby Martin. Shot and produced by students with Project Censored, this film reminds us the problem of fake news isn’t new, but rather, is another form of propaganda. Interviewees offer solutions for mitigating the pernicious influence of false content on America’s democratic institutions.

More About the Event:

Shot and produced by students with veteran media watchdogs Project Censored, United States of Distraction: Fighting The Fake News Invasion chronicles critical media literacy faculty experts, students, and media makers that provide contextual analysis for understanding the current rise of the so-called “fake news” phenomenon. In addition to deconstructing fake news, the film reminds us that this is not a new development, but rather, a form of propaganda. This documentary offers solutions for mitigating the pernicious influence of false content on America’s democratic institutions.