A few days before I left for India, American journalist, David Barsamian, was deported from New Delhi for his coverage of Kashmir. Barsamian reports for AlterNet one of the few national free speech radio outlets in the US. News reports quoted officials saying that his deportation resulted from his reporting on Kashmir during his 2009-10 trip to India, while on a tourist visa. If reporting the truth in Kashmir can get you deported, I was in danger.

On my first day in Srinagar, the local head of surveillance let me know he was fully aware of my arrival. It was a discreet enough interaction, but served its purpose: I was being watched. My threat? A pen and paper to record the stories of Kashmiris.

The silence of India’s occupation of Kashmir blankets the valley, like the morning smog obscures the Himalayan Mountains. There is a new face to the hundred-year-old struggle for Kashmiri sovereignty and independence. Sahil, age 12, lit up when I asked what his hope for Kashmir is. “I have a hope that there is a freedom in Kashmir.” Sahil’s father was disappeared in 2002. For nine years he and his mother have searched for his father, only his absence is present. Every day after school Sahil comes home to help his mother work—embroidering cloth to earn a few rupees.
The strong current of popular, nonviolent uprising for freedom continues to grow in Kashmir. It distinguishes itself from the armed rebellion of the early 90s, yet the demand is the same: liberation from occupation—the independence of Kashmir. Despite the Indian government’s own estimate of only 500-700 armed militants in the area, Kashmir remains the most densely militarized land on earth. There are approximately 700,000 Indian military and paramilitary in Kashmir, policing a population of 12.5 million.

Under the British partitioning of India in 1947, Kashmir joined India as a quasi-independent region. For a short time, Kashmiris enjoyed much self-rule, self-determination and indigenous leadership. Kashmir led the world in revolutionary land reform, implementing a broad redistribution of resources that created a population relatively equal in wealth. Was it that the Indian ruling elite feared that Kashmir would serve as a model for India? Could there have been a broad redistribution of resources in the subcontinent?

There are many interpretations of how the trust and relationship between Delhi and Srinagar eroded. The result was a deliberate stripping of Kashmiri independence, which on paper was protected under article 370 of the India constitution. While most of these rights have diminished, land protection in the valley is still observed and only Kashmiris can own land in the region. It is this provision that has prevented a complete repopulation of the area.

With the erosion of Kashmir’s autonomy, came the military repression and arguably an attempted genocide. From 1989 to 2011 there have been 8,000 documented disappearances and 70,000 deaths of Kashmiris resulting from the Indian occupation. Torture is rampant. Khurram Parvaiz, Liaison of the International People’s Tribunal on Human Rights and Justice in Indian-Administered Kashmir (IPTK), works documenting the cases of torture. “The most underreported phenomenon in Jammu and Kashmir is torture. If you go to any village hundreds of people in every village have been tortured, not just men, but women, children and old people as well.” Parvaiz was involved in documenting the torture of over 1,500 people who became impotent because their genitals were electrocuted. He goes on to explain that there have been hundreds of boys who were raped by soldiers. In one case the abuse by the army was caught on video, still there were no convictions. Parvaiz continued to describe another case of torture, “I have documented very horrible cases, but this is the most horrible.” The army kept a 60-year-old man in solitary confinement for one month. During that time, he wasn’t given anything to eat, but his own flesh. They cut the flesh from his body and served it to him. This was all he was given to eat for a month. Recounting the torture Parvaiz said, “This was something that shook me. We have hundreds of Guantanamo Bays here. Why is nobody talking about it?”

The torture and death can be buried no longer. In July 2011, the State Human Rights Commission of Jammu and Kashmir (SHRC) released a report documenting 2,156 unidentified bodies in 38 graveyards. The state report verified the findings of Buried Evidence, released in 2009 by Parvaiz’s group. Parvaiz explained how the findings were initially swept under the rug, “The government said that these unmarked graves are all of foreign militants and people need not worry about it.” There have been limited DNA tests on the remains. Parvaiz cited that DNA tests of 53 bodies identified that 49 were Kashmiri civilians, one was a Kashmiri combatant and three were unidentified.
Parvaiz said, “It is the right of the family to have the body. The government does not want to give these bodies to the families because there is something to hide. They are hiding the marks of torture.”

Kashmiri children grow up watching graveyards populate their villages. As people are buried, the community holds their story, the memory. Oral history is their biggest weapon against India’s brutal occupation. Even under occupation, the stories of the dead cannot be silenced.

The families of the disappeared continue to fight for the truth. Bilkeez Manzoor became a member of the Association of Parents of Disappeared Persons after her father disappeared in 2002. The army took him from their house in the middle of the night. They have not seen him since. Manzoor continues to fight for justice for her father and brought the case all the way to India’s supreme court. Manzoor recounted that she received threatening calls telling her not to continue with her case, “But I am not afraid. I thought I am strong; I should file this. I have never stopped.”
Manzoor explained her hopes for Kashmir. “I want independence. The armed forces, they destroy everyone’s lives through torture, through fake murders like disappearances. It is very horrible for us. When we have independence we’ll be free of this. With the independence of Kashmir, maybe the women will feel free.”

Looking at the high alpine lakes and valley surrounded by mountains, one cannot help, but think of Switzerland. With a population of 7.6 million people, Switzerland’s population is nearly half the size of Kashmir’s. Despite its small size, Switzerland spends about 1% of their GDP on military. If Switzerland can be independent, why not Kashmir? 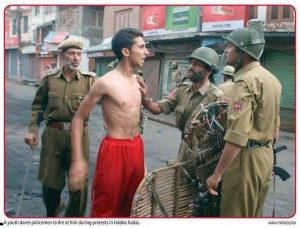