The new Project Censored yearbook is finally available. Paper shortages, another consequence of the COVID-19 pandemic, delayed the book’s printing. But we are glad to report that we now have books. If you are a supporting member, we will be mailing your copy very soon.

The listing of the Top “Censored” Stories of 2020-2021is also accessible on the Project website.

Several Project Censored folks have been featured recently by the following broadcast outlets: Project director Mickey Huff appeared on the Thom Hartmann Program, 11/24/21, to discuss the new book and how hedge funds have decimated local news outlets; Huff and the Project’s associate director, Andy Lee Roth, appeared on “Intersections,” with Matthew Peddie, on WMFE, the NPR-affiliate out of Orlando, Florida, to discuss some of the year’s top “Censored” stories and the importance of critical media literacy.

Media Freedom Foundation board members Ben Boyington and Allison Butler appeared on Peace Talks Radio to discuss how the constant barrage of advertising impacts our lives, and how critical media literacy education can head off those negative impacts. on Local Journalism Matters, with independent journalists Will Carruthers and Peter Byrne, who discuss financial conflicts of interest in local news reporting and “native” advertising as two challenges to news integrity. A previous episode of the Show welcomed back Kevin Gosztola, managing editor of Shadowproof, and also featured creative radical Eleanor Goldfield, who discussed the importance of whistleblowing and the case of Julian Assange. 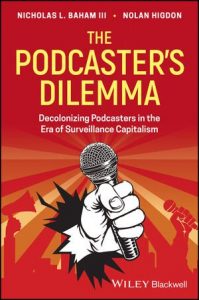 But Also by Distortion,” published by Truthout, draw on examples for Project Censored’s top story list for 2020-2021 to show how the effects of underreporting or misreporting may ultimately be more harmful than nonreporting.

Nicholas L. Baham III and Nolan Higdon’s book, The Podcaster’s Dilemma: Decolonizing Podcasters in the Era of SurveillanceCapitalism, published by Wiley Blackwell, will drop in mid-December. You can read more about and order a copy of the book here.

Back on the Project Censored website, even though State of the Free Press 2022 has just dropped, we are already reviewing and posting new Validated Independent News stories. This first batch of the 2021-2022 story cycle features independent news reporting focused on education, including algorithmic biases in online testing programs and the blockade on critical race theory in Texas schools.