Project Censored is a nonprofit organization supported by members like you. All levels of support are appreciated and you can make a donation here!

Project Censored has received a grant from the Free Press to support our media literacy educational programs. The grant will fund at least three new, paid summer internships, enhancements to the weekly radio show, and expansion of the Project’s Campus Affiliates Program, which includes our critical media literacy curriculum and educator development. Stay tuned for more details as we put this welcome support to work.

Project Censored has received a grant from the Free Press to support our media literacy educational programs. The grant will fund at least three new, paid summer internships, enhancements to the weekly radio show, and expansion of the Project’s Campus Affiliates Program, which includes our critical media literacy curriculum and educator development. Stay tuned for more details as we put this welcome support to work. 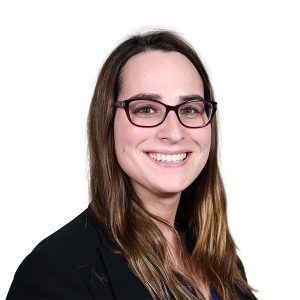 In addition to authoring the foreword to State of the Free Press 2022, Danielle McLean is a member of the board of directors of the Society of Professional Journalists, where she has also served on the SPJ’s Freedom of Information Committee and its Ethics Committee. A long-time investigative reporter, McLean currently works as a senior editor at Smart Cities Dive, a national news outlet that covers news and trends shaping cities and municipalities. We caught up with Danielle for a quick interview, early in 2022.

What motivated you to become a journalist? (How did you get started?)

I was actually interested in doing sports journalism when I was younger. I grew up playing ice hockey and other sports and was really interested in figuring out how to exploit other teams’ weaknesses, either through analytics or through the use of data. But as I actually started pursuing journalism in high school, college, and as a freelancer after graduating, I found a love for reporting the news, telling stories that haven’t been told before, and figuring out what barriers are preventing people from reaching their basic needs or are disproportionately harming one group of people over another.

How do you see the relationship between (ethical) journalism and social justice?

I believe in reporting the truth, providing proper context, acting as a watchdog, and telling the story of the diversity and magnitude of the human experience. These are pillars of SPJ’s Code of Ethics. To me, that includes identifying policies and barriers that disproportionately affect one race, gender, group, or other populations over others.

You’ve worked in a wide variety of news organizations. In your experience, how pervasive is censorship in the US press? What forms does it take?

It’s hard for me to tell. In my experience, I haven’t really experienced that kind of censorship, however, I’ve spent most of my career at local or regional weeklies and dailies, a progressive news organization, ThinkProgress, and trade publications, The Chronicle of Higher Ed and Smart Cities Dive, where we have a lot of control over our content. I think the biggest obstacle at certain news organizations, especially the Gannett-owned (GateHouse Media at the time) weeklies, where we were understaffed and only had so much bandwidth. The lack of pay, the insane hours, and cost-cutting measures by corporate conglomerates is the biggest factor that I’ve seen in terms of stories going unreported.

What conditions need to change to help restore public trust in journalism?

What needs to change is the attitude of corporate conglomerates and hedge funds that own newspapers that cutting costs and quality are needed to yield higher profits. It’s literally destroying democracy.

When you report on topics that involve human suffering or systemic injustices, how do you maintain an optimistic stance?

It’s hard. But I try to find the solutions to these problems, a policy or funding mechanism that can help the situation. Often those solutions are seemingly insurmountable but at the very least they provide some kind of guiding light.

Your bio at Smart Cities Dive suggests that you’re into ice hockey. Do you play? Are you a fan?

Yes! Growing up in Massachusetts, my dad had me on skates since I was four. I actually play on what’s considered a semi-professional women’s ice hockey team in the DC- Maryland region with a number of former Division 1 college, and retired NWHL/ PHF professional players. Also, I’m a fan of the Boston Bruins and Boston Pride.

In The News: Recent Publications and Interviews Featuring Project Censored 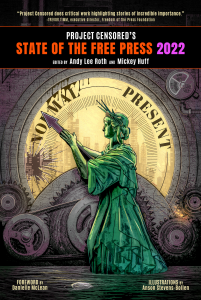 We’re honored to have an excerpt from our latest book featured in YES! Magazine, a publication dedicated to solutions journalism. In Trustworthy News for a New Normal, Mickey Huff and Andy Lee Roth examine the challenges facing contemporary journalism and they recommend concrete steps to promote it as a public good.

The Global Research News Hour featured a segment on the Project’s Top 25 stories of 2020-2021. Listen to the episode here: A Look Back at 2021: The Good, the Bad and the Censored.

Andy Lee Roth and Liam O’Connell published an article in the Winter 2021 issue of the Index on Censorship on Malaysia’s 2021 “Fake News” Ordinance. Their article, Omission is the Same as Permission, analyzed Malaysia’s introduction of emergency powers to deal with “fake news,” which was broadly ignored by Western media, and how this lack of coverage only emboldened the Malaysian government. Liam O’Connell, a junior at the University of Delaware, conducted this research through an internship with Project Censored during the summer of 2021.

Mickey Huff was interviewed by Sonali Kolhatkar on her program, Rising Up With Sonali, where they discussed the Project’s latest release and the state of our free press.

The Project Censored Show begins its 12th year on Pacifica Radio with a program featuring artists Marcia Annenberg and Angela Manno discussing their exhibit “Earth on the Edge,” which focuses on the climate crisis and the role of corporate news media in censoring important stories about the environment. In the year’s second broadcast, historian David Talbot and Aaron Good rejoin the show in dialogue about the Kennedy assassinations. The program features Good’s latest podcast series “American Exception: Empire and the Deep State” which focuses on significant untold political histories of the recent past. The month’s third broadcast includes media scholar Robin Andersen discussing her latest piece for FAIR on Hollywood’s Pentagon propaganda problem and her News Abuse chapter contribution to the Project’s new book, State of the Free Press 2022 which analyzes the corporate media’s “otherside-ism” and false equivalencies. Nicholas Baham III and Nolan Higdon also return to the program to discuss their new book, The Podcaster’s Dilemma: Decolonizing Podcasting in an Era of Surveillance Capitalism, out on Wiley Blackwell in February 2022. Branko Marcetic describes how legislators have “pushed a spate of anti-protests laws across the country”in response to the events of January 6, 2021. See Marcetic’s How January 6 Is Being Used to Crush Dissent on the Left, published by In These Times. This report serves as an update and extension to story #20 from State of the Free Press 2022, Proposed Domestic Terrorism Legislation Imperils Civil Liberties. When Big Brother Is Your Boss: The Rise of Surveillance Wages: Zephyr Teachout, writing for The Nation, warns that the mass uptick in corporate data-mining of workers could mean that “everything the Internet knows about you may end up being used against you by your employer.” Noting a trend toward “surveillance wages,” Teachout predicts that, in the next 10 years, “we will come to accept that each worker’s wages are constantly changing, behaviorally shaped, and different from their coworkers’.”

In an article for the Scheer Post, Chris Hedges writes about PEN America’s betrayal of Julian Assange. Kevin Gosztola, writing for Shadowproof, is producing regular updates on the Assange extradition trial, which is ongoing.

Helen Christophi reports for The Progressive on the Department of Justice’s counterterrorism expert with “deep ties” to white supremacist groups, in The Lone Wolf in the Henhouse. 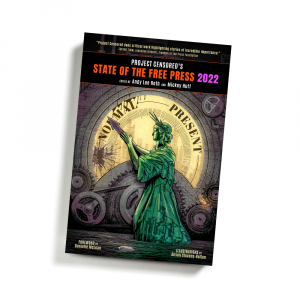 As ever, we ask for your generous support so we can continue our work promoting critical media literacy education and fighting censorship in its many guises. Please consider becoming a $10 monthly sustaining member to Project Censored.

As long as you are a member, we’ll send you a signed version of each edition of State of the Free Press (which includes our annual listing of the year’s 25 most important but underreported news stories), and our stylish, bold bumper sticker so everyone knows you are a supporter of critical media literacy education and a truly free press. You can also make a one-time, tax deductible donation here.