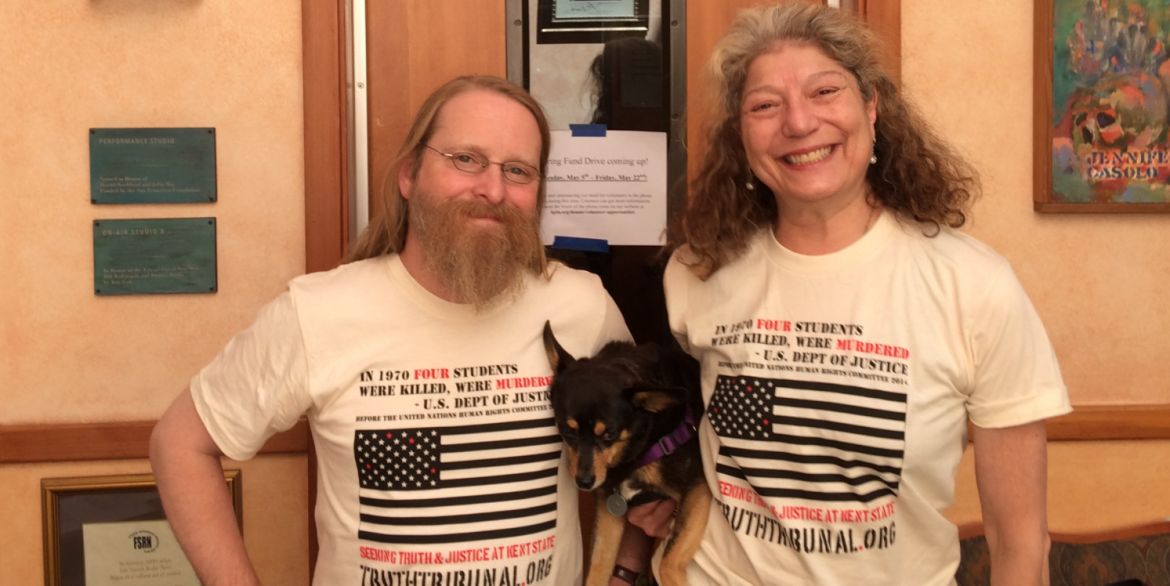 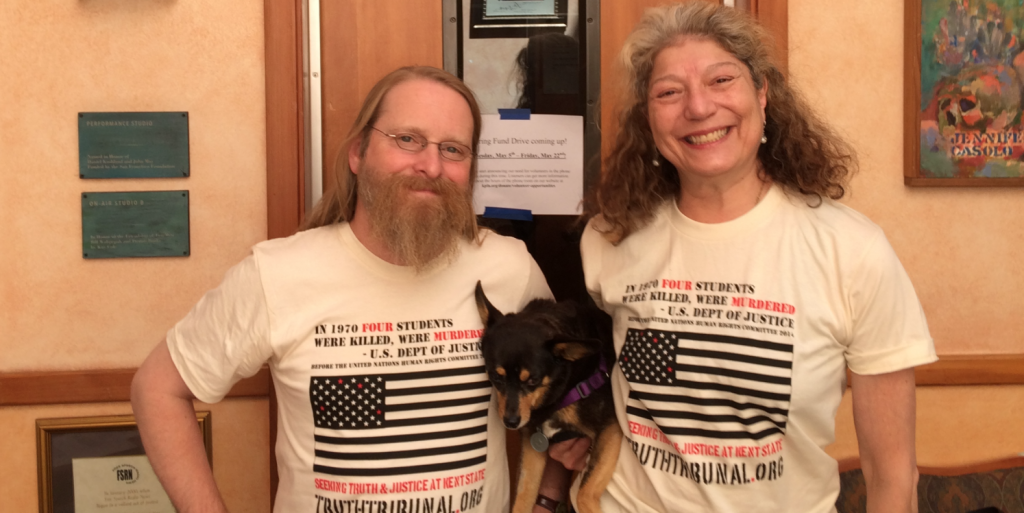 This May Day program begins with musicologist TM Scruggs sharing some of the best-known labor and revolutionary ballads. Then Santa Rosa, Calif. organizer Luis Santoyo explains some of the May Day actions taking place in his city. Geoff Davidian of the Real News Network discusses the rights of citizens to film police. Finally, a look at the 45th anniversary of the Kent State shootings. Joseph Lewis was shot and wounded that day; Laurel Krause lost her sister to the National Guard’s gunfire.
Listen to the radio show here

Thank you for attending the 45th commemoration of the Kent State Massacre and honoring, remembering this important day.

My sister Allison Beth Krause was one of four Kent State students killed by the Ohio National Guard in a campus parking lot here at Kent State University 45 years ago. As many of you know, this terrible day was memorialized in the Crosby, Stills, Nash & Young song ‘Four Dead in O-hi-o’ – one of the many reminders of how far and wide this tragic story has resonated in the United States. I am very proud to say that Allison was peacefully protesting the Vietnam war on that day and for this she was killed by the US government national guard. Allison took a stand against American war – and she died for the cause of peace. I am so honored to remember my big sister for this.

Three other students and protestors died that day – Sandra Lee Scheuer, William Knox Schroeder and Jeffrey Glenn Miller – and nine were critically injured. The Kent State massacre prompted the largest national campus protest strike in history, involving four million students nationwide. A sense of collective trauma followed as it registered with the Vietnam generation that this could have been any one of them. These were ordinary American students, no different from many of you, who were balancing a deep concern for their country’s role in aggression in Southeast Asia with simpler, teenage worries like dating, getting good grades and what the coolest new clothes looked like. To this day I cannot believe my sister was taken at that moment.

In experiencing Kent State first hand since I was 15, I was shocked when the American leadership blamed my sister and other Kent State students for the violence, the bloodshed and the massacre. We heard them say that the students brought it on themselves and that the guard should have shot more. My family heard the last quip as we identified Allison’s dead body at Robinson Memorial Hospital. Kent State survivors and stakeholders … and just about every young American had to hear this traumatic propaganda in our grief over what our government did to us. It was a two-fold injury that permanently sealed the trauma of this day.

And to this day the families of the victims have not had an independent hearing on the murders that took place on May 4th. We worried that the FBI, local law enforcement and even that Kent State University itself were working with, colluding with each other against the students, and were part of the government force that killed the innocent students and anti-war protestors. It was a real concern for us because the United States government refused to examine government complicity at Kent State.

Our government tried Kent State in civil courts, refusing to characterize and treat Kent State as an event involving the killing of American students and protestors. For Allison’s loss of life, my family received $15,000 and a statement of regret.

Even today, 45 years later, a culture of impunity persists. We read the news and see law enforcement killing young African Americans across the country. Those of us who witnessed Kent State have to ask whether things might have been different if this era of brutal suppression of political protest had resulted in accountability. I see echoes of Kent State when I read that Mike Brown’s family has to file a civil lawsuit because there will be no criminal accountability for his killing. This is the legacy of past impunity and it saddens me greatly to see it continue.

Once Kent State litigation ended in the civil settlement in 1979, our government destroyed key evidence and promoted only its own view, revising Kent State history ever since. I founded the Kent State Truth Tribunal in 2010 for this reason – telling the truth about what happened at Kent State is at the political heart of this barbaric incident. They took our family members but we will not let them take our truth.

An incredible thing happened at the 40th Kent State anniversary in 2010. The first digital, forensic examination of a tape recorded on a Kent State University dormitory window ledge at the time of the massacre surfaced in an archive at Yale University.

Stuart Allen, an evidence expert with a lifelong forensic career, was commissioned to digitally examine the recording. Allen forensically verified that the audio on the tape revealed a COMMAND TO FIRE. Despite government assertions that the killings were a spontaneous act of self-defense by frightened soldiers, the tape irrefutably established that in fact there was an order to shoot. I wept when I heard the words uttered by the guard commander on tape.

The US government response to Allen’s Kent State forensic analyses was to ignore it. Two years later the Department of Justice officially refused to reopen the investigation and bring new federal charges: “There are insurmountable legal and evidentiary barriers to bringing a second federal case in this matter.”

Last year the Kent State Truth Tribunal brought Kent State before the United Nations Human Rights Committee in Geneva. There something remarkable happened. The US delegation at their formal treaty hearing and review admitted, “In 1970, four students were killed, were murdered and nine injured.” In a simple phrase – and for the first time in 45 years – our government finally admitted what we all knew to be true – this was government-executed murder.

Our response was also simple. Now that our government has established that Kent State was murder, we demand they treat Kent State as murder and immediately examine the evidence in the forensic digital findings that captured the order to shoot. We know the statute of limitations never expires for murder.

Will the US government do this? Not without pressure from those of us who still care deeply about Kent State and not without help from all of you.

Our work at the United Nations with the Human Rights Committee continues in 2015. Please stand with Allison, the Kent State Truth Tribunal and me in this 45th year. Let’s demand US government accountability for the unlawful killings at May 4th Kent State. Join us and ‘like’ us on facebook at facebook.com/KentStateTruthTribunal

I’d like to close with a portion from my speech at the United Nations:

“The right to assemble and protest is professed as a cherished American value and is a fundamental facet of our democracy. The Kent State precedent has cast a shadow over this democracy for over 40 years. If Kent State remains a glaring example of government impunity, it sends a message that protestors, especially young men and women, can be killed by the state for expressing their political beliefs. My sister died protesting for peace and I would like to honor her memory by ensuring that this never happens to another American protestor again.”

We continue to demand truth and justice for Allison, and for all harmed at Kent State. We need your help. Please show solidarity and help our cause by making a donation for a Kent State Truth Tribunal UN t-shirt. Thank you.